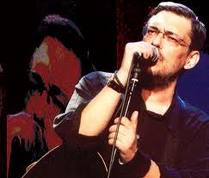 Lavrentis Mahairitsas was born in Volos. At the age of 20, he forms the group P.L.D…, with which he goes to France aiming for an international career. When they fail, they return to Greece, where they release their first album in English, ARMAGEDON, in 1982. After the low interest shown in that disc, they turned to Greek lyrics. The group was renamed to TERMITES and they released their second album, named TERMITES, in 1983.

In 1984, they released the album “Amartoli Maria”, which makes everyone get interested in their music. Giorgos Ntalaras takes part in two of their songs. Two other albums followed, the “Tsimentenia trena” [1986] and “Perimentas ti vrohi” (1988). The last album by Termites was a live album, recorded in Lycabitos and named “Tsimedenio Kontserto “. In 1989, Lavrentis Mahairithas began his solo career by releasing the album “O Magapas ki i sagapw”.

Two years later, in 1991 the popular “Didimoteiho blues” is released and it becomes gold. In 1993, he released the album “Rikse Kokkino sti nyhta”. Then he met Dionissis Tsaknis. Their successful live performances led to an album, which was released in 1994 named “I nyhta tha to pei”. The songs were recorded during their concert in Lycabitos and two of their performances on Metro stage. These albums are followed by the not so popular, but still great, “Parathyra pou kourase i thea”, in 1995 and “ Pafsilipon”, in1996, which was widely accepted by the audience.

After that, he releases the album “Etsi drapetevo ap’ tis parees”, in June 1999, which contains the popular song “Kai ti zitao” with the voice of Dionissis Savopoulos. After that, he composed the soundtrack of the movie “Enas ki enas” and many songs for the album of Giorgos Ntalaras. He released a new album in 2001, named “To dialeimma krataei dio zoes”. A significant fact about this album is his collaboration with Angelo Branduardi. In 2003, a new album came out under the title” Sto afierono”. Also he took part in Philippos Pliatsikas’ album collaborating with Dionissis Tsaknis, in the song “Hriazete ena thavma edo”!

In 2005 “Alkyonides Meres” is released with songs recorded in live performances and it is followed by “Eroes me karbon”, in 2005. This year, he has just released a new album, the “I enohi ton amnon”. All these years, apart from the memorable collaboration with Dionissis Tsaknis in albums and live performances, he has also cooperated with some of the greatest Greek artists, such as Eleftheria Arvanitaki, Haris Alexiou, Vassilis Papakonstantinou, Christos Thiveos and others.

Pteleos, our village, is his actual hometown. He visits it quite often and, recently, he has paid a visit to our evening English class, where he gave us his autographs. All these make him shine in the Greek music scene and his songs will always be heard no matter how many years shall pass!