Making carnival masks is always fun for kids (and this goes for some grown-ups as well!), but making a mask in which you can hide your whole head can bring tremendous excitement in the house, especially if one of your kid’s best friend happens to be there when you make it! My daughter Mary and her friend Thanassis started working on the masks yesterday! We cut lots of strips of old newspapers and we bought some wood glue, a color spray (white) and two balloons! 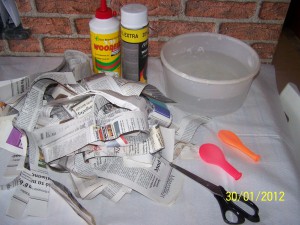 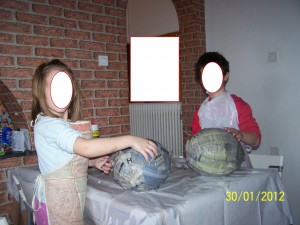 Then, we let the balloons dry for a whole day! 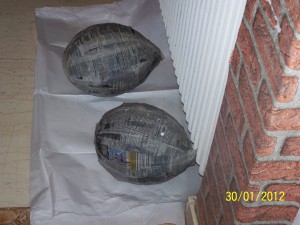 Today schools were closed owing to the snow and cold, so here we were again, painting this time the balloons with the white spray! Actually, you can use tempera or finger paints instead (it’s more fun for the kids and the result will be much more impressive if you use a variety of colours!), but the spray works faster, so that is what we did (the kids were not involved this time, this was all up to me, so that they wouldn’t inhale any chemicals). Again, we let them dry for a while. And then, the fun begins!!! We popped the balloons, made an opening at the back for the head to enter and we cut eyes and mouths! Then, they used their imagination and any materials I happened to have at home to decorate their masks any way they liked! Here’s what they made! 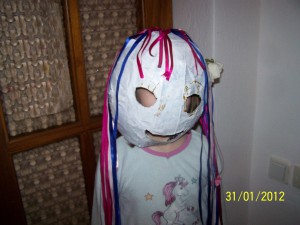 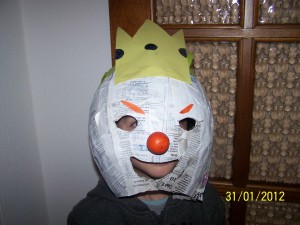 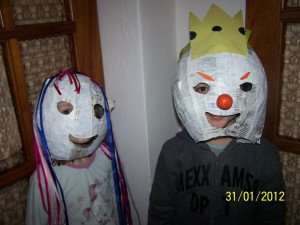 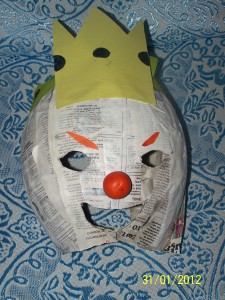 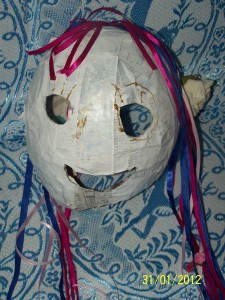 While we were waiting for the spray paint to dry on the balloons, we made some simple cardboard masks (we printed them from www.paidika.gr)! The kids had so much fun with them, but not as much as they did with the ones that covered their whole head! 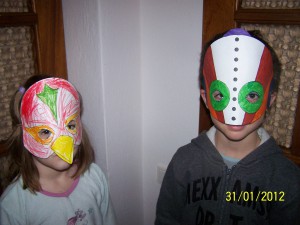 Although it takes time to make a mask like this, we actually attempted to make it at the 1st Primary School of Almyros with the 6th graders a couple of years ago. My learners back then did a wonderful job indeed and they used their masks at the carnival party at school, they took pictures of them for the English School Newspaper and they decorated the school corridors with them throughout the Carnival period (they thought of it as something like a carnival art exhibition)! They even wrote an article for the school paper on how one can make the mask (You can read the article – in Greek – here). You can try this at school, too, by all means, but it is definitely going to take you more than one teaching hours if you decide to do everything with your learners involved. In my case, learners spent one teaching hour to place the newspaper strips on the balloons, I spray-painted them all on my own and, when they were dry, the learners took them at home to decorate them any way they liked! It would have been much more fun if they had decorated them at school, but the element of surprise when they brought the masks at school was almost equally enjoyable and fun (it also boosted the learners’ self-confidence, given that learners from other classes gathered to check the masks out and ended up congratulating the learners involved)! Here are some pictures of my learners working on the masks at school and some pictures that present what they have created! 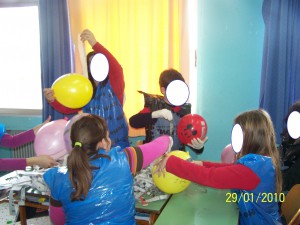 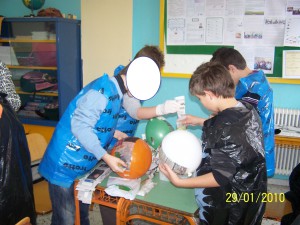 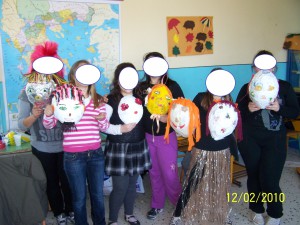 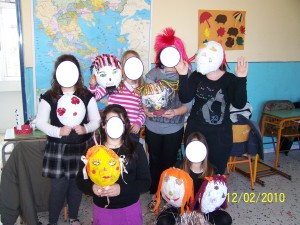 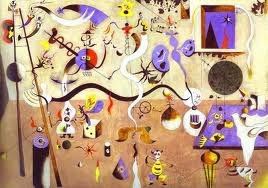 In terms of dressing-up, Halloween seems to be all about spooky costumes, whereas the Greek carnival appears to fulfil our dream of transforming into anything we desire! Whether it is Halloween or Carnival, every year, we, teachers, try to find crafts we can do with our learners in class! Here you will find an assortment of sites that abound in crafts, decorations, coloring pages, costume ideas, treats recipes and printables! Have fun with your learners at school and don’t forget your kids at home! You can have so much fun with them!

ActivityVillage (Skeletons, witches, bats and cats, pumpkins of all sorts, candy corn, monsters and ghosts too, so with well over 80 craft ideas here you should find something that is just the right amount of spooky for you!)

AllFreeCrafts (Here you can find crafts and decorations, Halloween recipes, party ideas and Halloween games, Halloween costumes and makeup, as well as printables!)

FamilyCorner.com (Crafts, decorations, recipes … you can try them at home with your kids, too!)

AllKidsNetwork (Halloween crafts for kids of all ages!)

20 Kid-friendly Halloween decorations (last-minute crafts, perfect for at-home or in the classroom)

Here is the video we normally watch at school to find out how Halloween is celebrated in Britain: 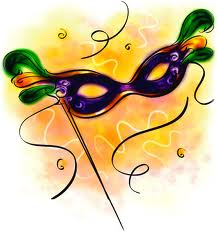 Since the beginning of this school year the learners in the Primary School of Pteleos exchange presentations of national customs and traditions with other European Primary Schools. Here is what our 5th graders wrote about the Carnival celebrations in Greece.

Naoussa. In Naoussa, every year people celebrate the custom of “Yenitsari” and “Boules” which has its roots since when Greece was under Turkish occupation. Yenitsaroi are men dressed in traditional Greek costumes and Boules are also men dressed-up as women. They all wear masks.

Halkidona. In New Halkidona, in Thessaloniki, Greece, people celebrate the Carnival playing yogurt fights. They throw yogurt at each other!

Skiros. In Skiros, people celebrate the custom of “the old man of Korela”. They wear the traditional costume of the sheppard and they hang big bells around their waist.

Naxos. In Naxos, men wear traditional Greek costumes and go around the neighborhoods and sing.

Galaxidi. People in Galaxidi have a strange, but funny carnival custom. On Clean Monday they throw flour and ashes at each other, so they turn white and in a minute they’re all covered in black! It is a very funny tradition and many people visit Galaxidi to participate in this traditional game!

Patra. Patra is one of the famous destinations during the carnival. People in Patras participate in a long carnival parade, dressed up in different costumes. There is also a treasure hunt game!

Clean Monday is a big celebration in Greece. People eat seafood and vegetables. This day in the morning the people go in the countryside or the mountain and they fly a kite. They have a picnic there. Clean Monday is a very good and enjoyable celebration. Children usually have lots of fun!

Clean Monday is the opening day of the fasting for the Greek Orthodox Church and it means the end of the Carnival. It was named like this because the early Christians used to clean their body and soul on that special day, preparing themselves for the Easter holidays. Fasting lasts 40 days, the same as the days Jesus spent in the desert. On Clean Monday it is common that we eat ‘lagana’, which is a flat loaf of bread, and beans soup without oil. Traditionally, it is the last day of the year we can dress up for the carnival and we go out and fly kites. Clean Monday is celebrated 48 days before Easter. For more information, you can visit: http://en.wikipedia.org/wiki/Clean_Monday

Gaitanaki is a traditional Greek dance that we dance during the carnival. It is a colourful and funny dance!

This dance is a symbol of the circle of life. We move from happiness to sadness, from winter to spring, from life to death and the opposite!

Valmas was a game that was played in the village of Penia. There were two teams and each one was tied on each side of the rope. The winner was the team that dragged the other team towards its side. It was a special game because after the game they had funny dialogues, like a play.

A great party followed our presentation of the dances and in the end we burnt the king of the carnival in a big fire that people lit in the central square.

THE CARNIVAL OF VENICE
by Jim M.

When it is carnival time, we wear masks and costumes to have fun, but some cities take this time more seriously. In these places decorations, masks and costumes are innumerable for local people and visitors. One of those cities is Venice, which is located in the north of Italy. It is a city which is also well-known for its canals, for the houses that are over the water and its beautiful gondolas.

The preparations start months before the beginning of the carnival. For the world famous masks they use simple colours, like white, black, gold, silver or a mixture of these last colours. They are simple, but they have a perfect design and shape. Their history dates back in the Medieval Ages, when the aristocrats used the masks to get out of palaces easily and seduce women. One of these aristocrats was Jacomo Casanova.

The costume themes are also old, just like Comedia dell’ Arte, with harlequins who represent poor people with their costumes. Another well-known person was Dotore, the doctor of the plague. This costume includes a black uniform and the mask of a hawk, in memory of the illness that cost a lot of lives in Venice.

According to travel agents, magazines and my personal opinion, Venice at this time is a wonderful city with magnificent shows for people of all ages. I think that you should visit this city to see also kings, queens and soldiers under the starry sky of Venice!