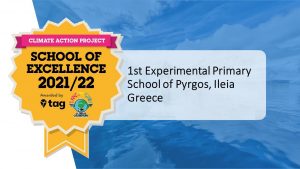 Global distinction for the 1st Experimental Primary School of Pyrgos, as it was selected as a School of Excellence award by the Cartoon Network Climate Champions and the Climate Action Project, https://www.climate-action.info/ among 250 schools worldwide.

The award was presented during the live web event (https://youtu.be/h1LpoW5_5Vg ) organized on Thursday November 4th in the wider context of the UN Climate Change Conference (COP26) in Glasgow entitled «Day Climate Action Day, which this year was attended by 250,000 people worldwide and among the guests were Prince William, the head of the Environmental Program from the UN, the international environmental organization WWF, NASA, etc., climate scientists and activists.

The 1st Experimental Primary School of Pyrgos actively participated in the online initiative, as the 5th Grade student, Aggeliki Paraskevopoulou, addressed a question to the United Nations Representatives (with a video recorded message) about the appropriate way of human contribution to the regeneration of the burnt forests.

«Hello, My name is Angeliki and I am a 5th grade student at the 1st Experimental Primary School of Pyrgos, near Ancient Olympia in Greece.
Last year a lot of fires burnt a lot of forests in Greece.
In your opinion what is better?
Should we do reforestations or should we let nature grow these forests again?»

The 1st Experimental Primary School of Pyrgos has been participating in the action since 2017 which started and has carried out environmental actions and programs in collaboration with other schools nationwide and audience. level, with eTwinning projects such as Gaia’s Buddies, Let’s Go Eco, Food for All and Forests Friends, and at the global level of projects such as Climate Action Project, Goals Project, No More Plastic. We thank the newspaper Proini and the journalist Mr. Panagiotis Foteinopoulos for the article he wrote about theprize of our school https://proini.news/pagkosmia-prasini-diakrisi-gia-to-1o-peiramatiko-dimotiko-scholeio-pyrgou/?fbclid=IwAR3PkvCDW8q-J1P0hzKyhq1YOoTM7YnNv85ZAhA0Dj-mKC3YrdrZF0_Feac

Huge thanks to the educational website Alfavita for highlighting our action https://www.alfavita.gr/ekpaideysi/362542_draseis-gia-klima-pagkosmia-diakrisi-gia-8-ellinika-sholeia?fbclid=IwAR1npFjibVj6gwkKZfATjfAuad8L1QAa36p5F6-DPIbghCLEg5W3oGIJO50

Heartfelt congratulations to our dear student, Angeliki Paraskevopoulou! May she always be healthy, creative and happy! 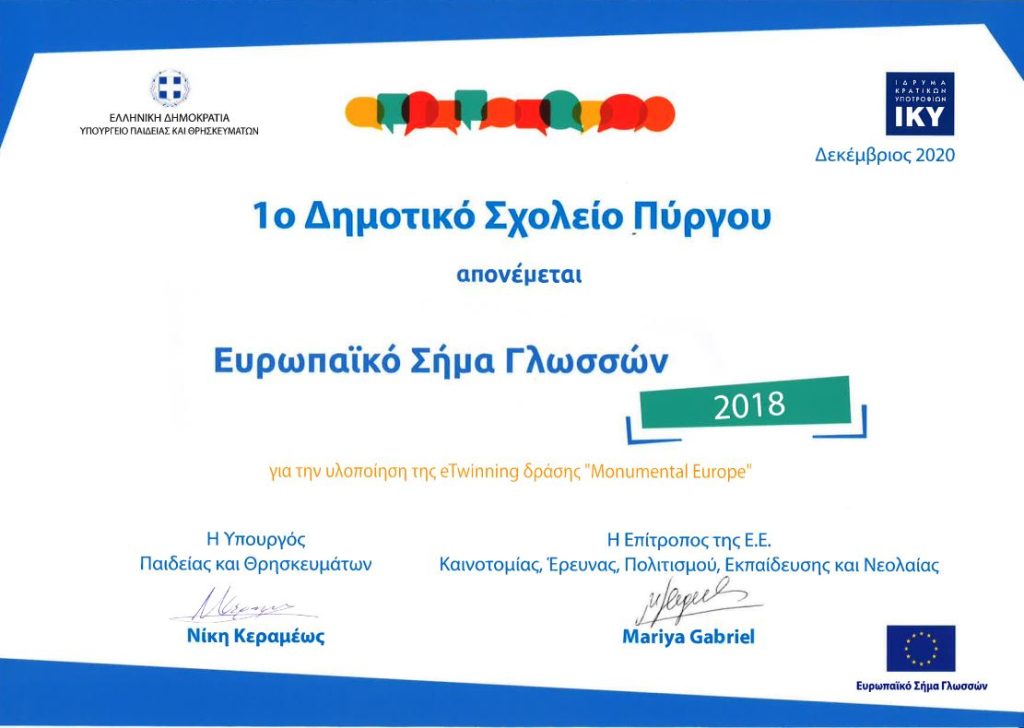 Our eTwinning project Monumental Europe was awarded the European Language Label, a distinction that is awarded to organizations and individuals that achieve to develop tools and implement teaching methods, which can be rendered good practices and be adapted to different language environments from those in which they were developed.

You can see the results at https://www.iky.gr/el/iky-rss/item/3769-drasi-evropaiko-sima-glosson-apotelesmata?fbclid=IwAR3DVc8jq9bJM2BUDaS08icqKSGwShxmhSHUGgyHvVw6UezbNDEMbF9BZ3Q

You can read the announcement on the facebook page of our National State Scholarships Foundation on November 11th, 2021

Heartfelt thanks to Iro Riga for her article on the local newspaper Proini https://proini.news/me-to-evropaiko-sima-glosson-2018-diakrithike-to-1o-dimotiko-scholeio-pyrgou/?fbclid=IwAR2zN1ORt2gHxkvwIL5B02hnx77sp4AnSgJz73JeKU_JaIkK9P5X1AfK_b4

Travelling the World with Europeana

The Learning Scenario “Travelling the World with Europeana” was developed during the “Digital Education with Cultural Heritage” online course. The course aimed to improve teachers’ understanding of cultural heritage in order to efficiently integrate it into their lessons and practices 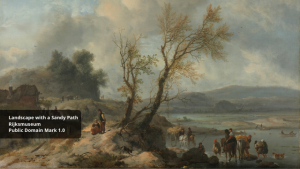 My LS aims to familiarize students with digital cultural heritage, and raise their awareness of the values of cultural diversity. Students will use Europeana resources from the collection of digital media from European museums, galleries, libraries, and archives to create a story.  The integrated material, the web tools, and the designed activities encourage learners to develop their competencies and become more autonomous, creative.

It is a flexibly designed learning scenario that can easily shift between online and in-person teaching, adaptable to the circumstances and learners it will be used for.

It can be accessed here.

Travelling the World with Europeana (EN-CUR-605)

We completed the European Week for zero pollution with my 4th grade students, in the eTwinning project European Green Week.

We continue to raise the awareness of our students about the health of our planet, in the context of the Climate Action that began with our participation in the Climate Action Project, ClimateActionEdu – Take Action Global ,and the award of our school.

We truly thank Panagiotis P. Foteinopoulos for the excellent presentation of our participation in his article on November 8. Continue in the local newspaper Proini

Huge thanks to the Greek educational Portal Alfavita for publishing an article on the site, https://www.alfavita.gr/ekpaideysi/362542_draseis-gia-klima-pagkosmia-diakrisi-gia-8-ellinika-sholeia?fbclid=IwAR1muQ-FE45kpeRO-NSmuriwDUqMg5hhUlff57DWZywKVV_ZLDHyjvt-EXA

My Story of Implementation ‘Inventions and Discoveries’ was published on the site of Europeana on October 26th, 2021.

The learning scenario was implemented by all three classes of the 6th grade Primary School students, aged 11-12, during distance teaching, both synchronously, four 30 minute sessions, and asynchronously, on the digital platforms suggested by the Greek Ministry of Education, webex and e-class respectively.  All learners were familiar with the Europeana platform and its resources, as they had previously worked on it with the “Implementation of ‘In My Shoes’ (SOI-EXT-190) in 2020, while they were in the 5th grade, and the “We Give Peace a Chance” (LS-GR-544) in 2021. The activities designed are cross curricular, allowing learners to develop their skills and expand their knowledge on English, Science, Technology, Geography, History, ICT, Languages and Literacy. The content, resources, materials, and activities suit the current Greek primary education National Curriculum. The students had already finished Unit 4 in their course book, which familiarized them with biographies of inventors, the story of Daedalus and Icarus, the Wright Brothers, Igor Sikorsky and the Montgolfier brothers. 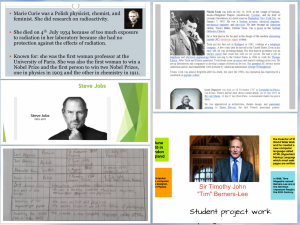 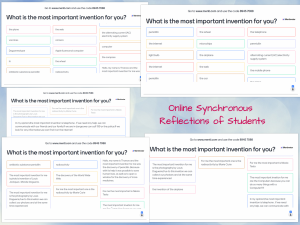 By the end of the implementation of the learning scenario, the learners were able to understand and identify specific information in authentic informative or descriptive texts, concerning scientific developments and the biographies of important personalities. They were also able to produce short texts, utilizing information from different sources, both visual and textual. They developed their speaking and listening skills, understanding and interacting about biographies and scientific breakthroughs.

Students, additionally, developed their digital competence as they did safe web search, understood and made use of digital resources, used digital collaborative tools, familiarized themselves with the educational value of websites, expressed themselves through the computer environment and created their own digital narrative.

Finally, learners developed their communicative and social competences as they interacted and collaborated. They raised their awareness about gender equality, breaking down prejudices and stereotypes, and familiarized themselves with STEM based professions.

The 1st Experimental Primary School of Pyrgos has been chosen as one of 100 schools across the globe to participate in World Education Week. This is a celebration of the work done by schools and education systems in the face of challenges in providing teaching and learning throughout the Covid-19 pandemic. Schools selected to participate will share their experiences and expertise gained over this period so that teachers, schools and education systems around the world can emulate these.

The theme of World Education Week 2021, which takes place online from Sunday 3rd October to Friday 8th October, will be ‘School Celebration’. It will comprise 100 events, each aligned to one of ten sub-themes. These are: community partnership and collaboration; innovation; overcoming adversity and building resilience; supporting healthy lives; environmental sustainability; creative approaches to problem-solving; global citizenship; developing others; inclusion; and student leadership.

Join us, 100 schools & 20 impact organisations for a World Edu Week celebration on Tuesday 5 Oct. 09:00 GMT- 10 GMT at the presentation «United we can! Enabling all children to achieve their full potential» In case you want to attend any of the events schools from around the world organise, you can register at http://worldeduweek.org/event/1st-primary-school-of-greece/

It is free. All the events will be uploaded at https://t4.education/events/world-education-week 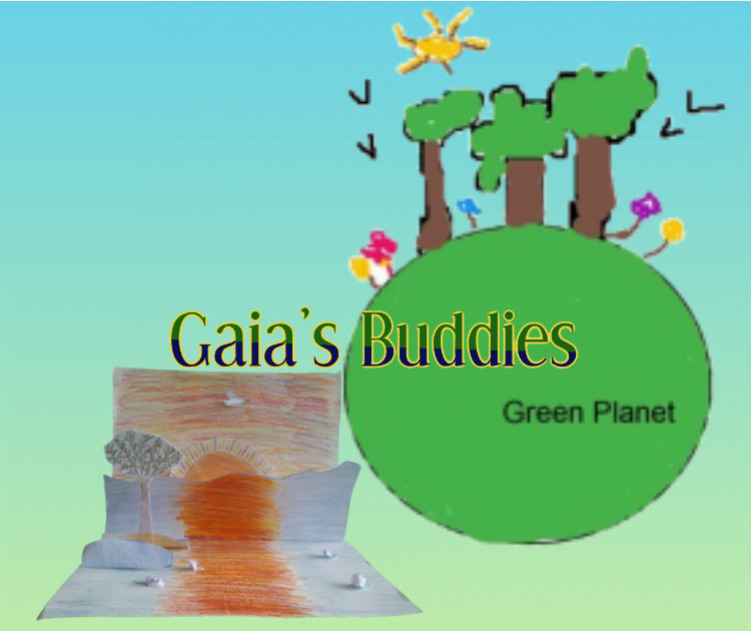 Gaia’s Buddies is a collaborative eTwinning project which aimed to raise students’ awareness of environmental problems. Students from Greece and Italy worked on the problems our planet faces, such as climate change and endangered animals, collaborated, experimented, made construction of Knowledge, made presentations and shared their findings. enhancing their motivation and creativity. Through the pedagogical use of ICT, students were able to develop their cognitive and social skills as well as to communicate and exchange information and material. 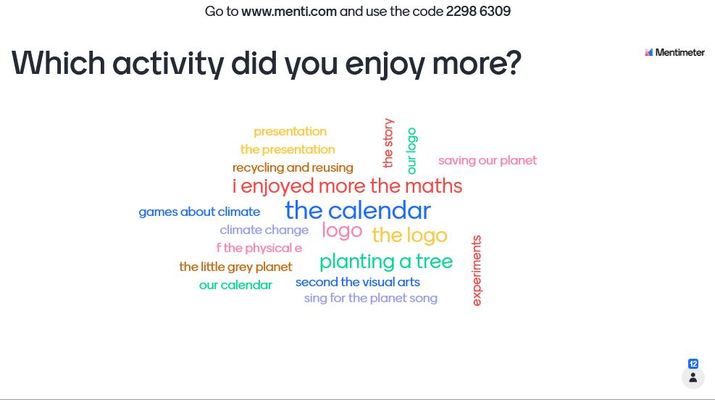 Students collaborated and made presentations, created the logo of the project,  took part in the discussions in the forum,  made  the Creativity Calendar and the collaborative digital story The Green Planet,  created interactive games for Climate Change and Sustainability, reflected and evaluated the project. 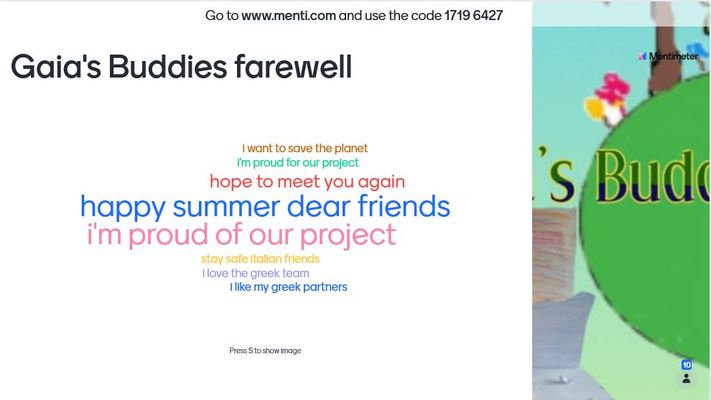 The Adventures of Olympic Mascoteers

“The Adventures of Olympic Mascoteers” is a collaborative project which we coordinated with Valentyna Gatalska and Nesli Özcan. The students of the 1st Primary School of Pyrgos collaborated with the students of the Kyiv Gymnasium Troyeschyna in Kiev, Ukraine, and their peers from the Ahmet Mete Işıkara İlkokulu in Akdeniz, Turkey and, with the pedagogical integration of ICT, they participated, designed and reflected on a variety of enriching learning activities.

The project focuses on the Olympic Games, the Olympic spirit, and the healthy and balanced way of life. Students from Greece, Ukraine and Turkey participated in collaborative national and transnational activities in order to learn more about the Olympic Games in the Ancient and Modern times, about national and international Olympic Athletes, and about the fundamental Olympic Values. They constructed knowledge developing an intercultural dialogue, created mascots embodying the sports spirit and identifying core skills, made presentations, wrote haiku poems, made handicraft and participated in the Olympic Orizuru Peace Action.

Peace is beautiful
Sharing, loving, helping, and
Thinking of others 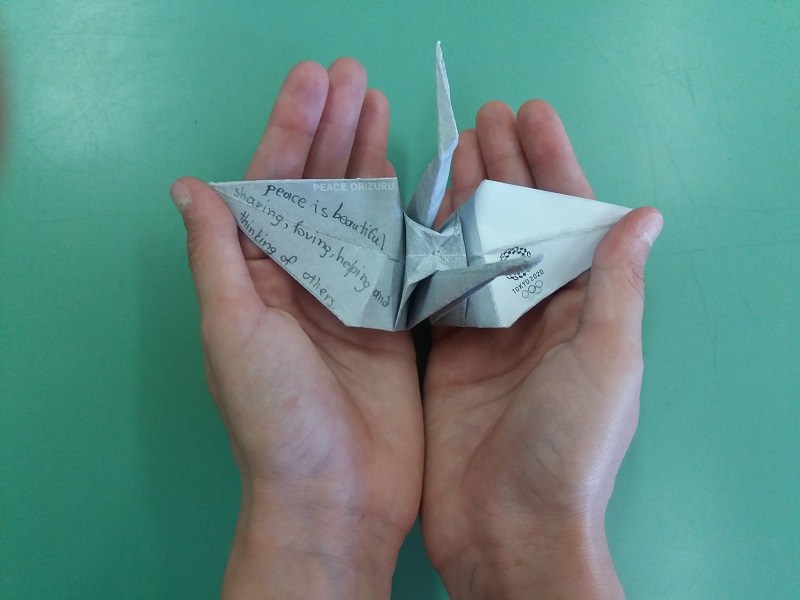 Peace seems like freedom
You can do it
With love, respect and hugs 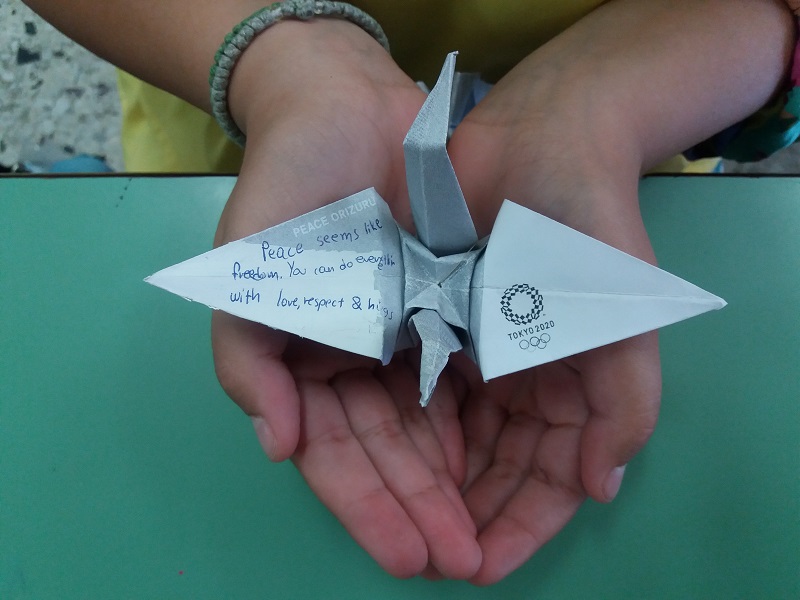 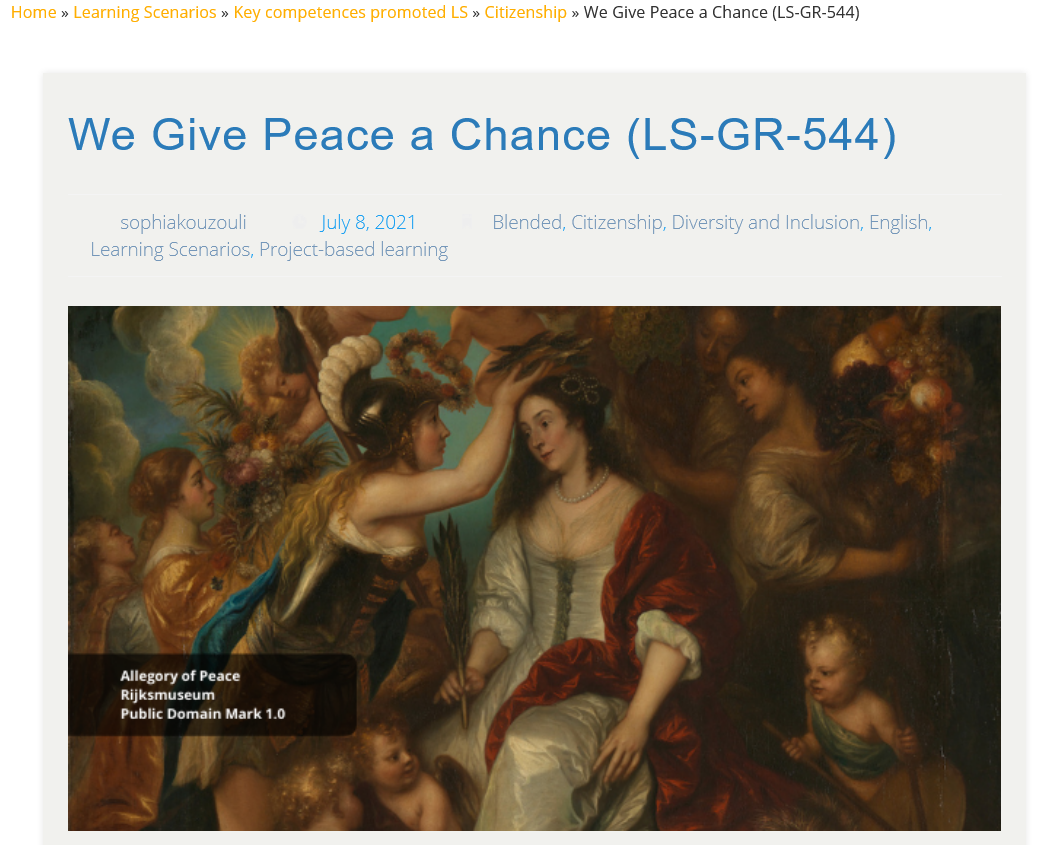 Most heartfelt thanks,  Europeana!

Public Domain Mark 1.0: the featured image used to illustrate this article has been found on Europeana and has been provided by the Rijksmuseum. 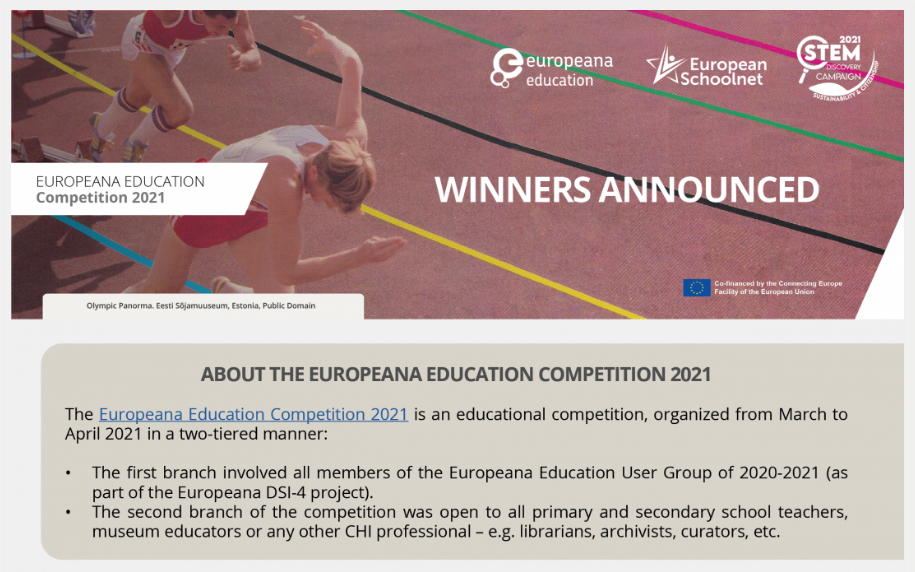 Therefore the Learning Scenario is going to be published on the 08/07/2021 in the Teaching with Europeana blog and featured in an Europeana Publication which will be disseminated online.

The Europeana Education Competition 2021 in short

Due to the current COVID-19 crisis, the original award, a workshop in Brussels, has been readapted:

The 20 winning participants from the Europeana Educational user group 2020-2021 will be featured in a Europeana Publication in September 2021 and their Learning Scenarios or Stories of Implementation will be disseminated online; European Schoolnet reserves the right to select an alternate winner in case of non-availability of the selected person.

The winners’ best entries will be translated to 8 languages (Spanish, Portuguese, Italian, French, German, Romanian, Polish and Turkish) and published as an online publication in each of these languages (plus English).

Prime example of integrating digital cultural to formal education, this booklet will be disseminated across Europe, to Ministries of Education, as well as teachers!!!