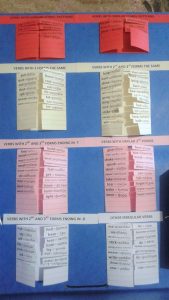 English Irregular Verbs … Every English Language learner I know and anyone that has ever been a learner of it can tell you numerous stories on how boring and torturing it has or it had been to memorize the past tense of the irregular verbs in English! And just when they thought they had been over with this long list, there came the third column with the past participle, only to make matters worse, more complicated and more boring! Well, being an English Language learner myself back in the … (let’s just say) years of no internet or any other realia in the classroom, I can still remember these long afternoons with my mum dictating the verbs, me writing the two columns and then studying the whole list again to memorize what had not been successfully memorized … ugh …

Being a huge fan of interactive notebooks and having already used them in tutoring my daughter (plural nouns, demonstratives, subject/object pronouns and possessive adjectives), I have decided to exploit their educational and recreational value in order to create a lapbook this time! Using an A4 size folder with a rubber band, we created together a lapbook that was actually fun to make, engaging to fill in and easy to use as a resource or revision! First, we started cutting and gluing the templates that I had made for this reason (after categorizing the verbs in terms of their irregular forms, I created a template that would best serve our needs)! You can download the templates here and print them in colour A4 size paper, if you like:

Then, using our course book, my daughter filled in the past tense and past participle forms of the irregular forms after flipping each piece of paper! 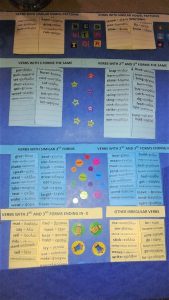 The categorization of the verbs helped her a lot to first guess the form and then verify it with the help of her course book! Therefore, she said that she studied them while doing the task! When she finished, she decorated the cover of the folder and kept it in her bookcase, saying that she prefers to study them from this lapbook rather than the coursebook! A few weeks later, she decided that it would be more helpful to stick it on the wall, so that she can refer to it more easily when needed! And, in case you wonder, no, she did not memorize everything perfectly in one teaching session, but she liked studying them this way and she does not sigh in despair when we refer to irregular verbs and that is awesome!

These are only some of the benefits of lapbooking, as they have been presented in numerous articles and, anyone who regularly uses them, has probably a few more to add! Yes, it took some time to categorize, set up the templates and print everything to be ready for the lesson, but the actual cutting, gluing, filling in of the correct forms and decorating took no longer than a teaching hour that would have probably been even more entertaining and involving if we had the chance to work on it in pairs, or in a group! Therefore, this is something that we can probably try with the 5th and 6th grades of the Greek public Primary School, provided that we can obtain the necessary materials and maybe do some cutting on our own, before introducing the activity to our learners, so as to keep it restrained in one teaching session!

Flashcards in the Greek public school third grade can be used in numerous ways and they can prove to be life-saviors with early-finishers! During the lesson, we normally use them to revise the letters of the alphabet that we have already learnt and introduce the new ones, along with the new vocabulary that accompanies them! Yesterday, however, we used them to revise letters and vocabulary in a fun way!

To be more precise, we divided the whiteboard in two parts. Each part had the same number of flashcards. The learners were supposed to match the picture with the word! The learner who was the first to finish correctly the matching task, won some stickers!

These flashcards were edited, printed and laminated about three years ago and were based on the alphabet vocabulary presented in the Greek public school third grade material Magic Book 1! We use them every year and, when we finish with the alphabet, we put them up on the wall for both educational and decorative reasons!