On Monday students worked in mixed teams. During the Greek language lessons, students learned some basic vocabulary of every – day words for the different communicative circumstances. They were asking each other questions and answering in English and in the Greek language. We laminated pictures and wrote the pronunciation and spelling of the words in each Greek word. The students had to place the laminated words in the correct picture. The students were divided into groups, read each word, understood its interpretation, and placed it in a certain period of time in the correct picture. 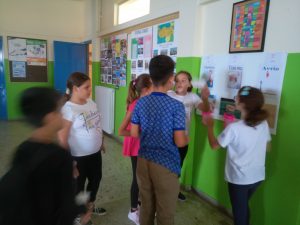 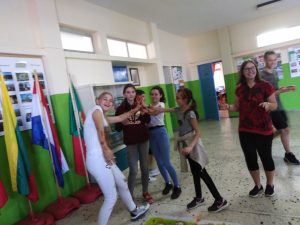 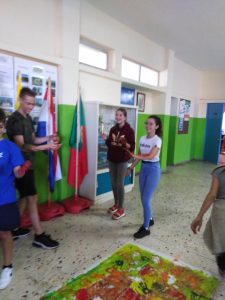 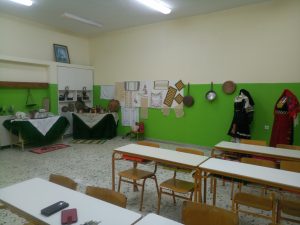 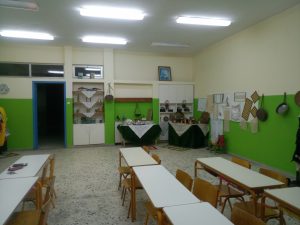 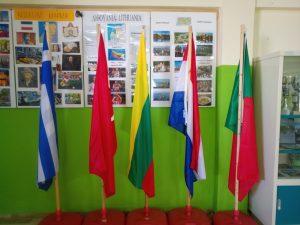 On Tuesday we made the History lesson in the ancient Olympia, students learned some basics of Greek history and the Olympic values, and we combined it with European values, especially we focused on the acceptance of the foreigner. Students made some Olympic games. During the ICT lesson, students create a wiki in the eTwinning, about the ancient Olympia, about the history, the Olympic games (press here) 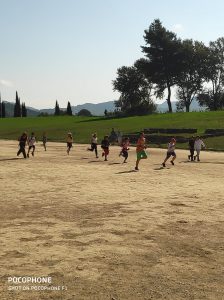 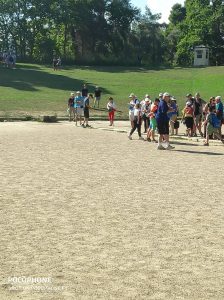 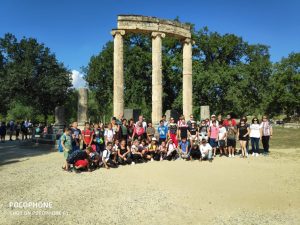 In the afternoon students made modern sports games at the stadium of Amaliada city, at the facilities which are being used by our school. Students made comparisons between the ancient and the modern games. The conclusion that the differences are the prizes and the values of the ancient Olympic games which are similar to the European values of the acceptance of diversity and the seeking of peace. 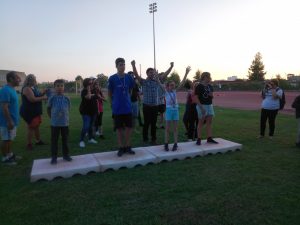 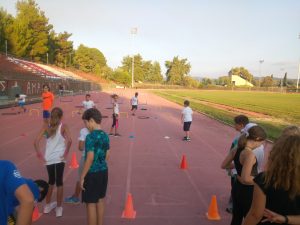 On Wednesday we visited the ancient Ilida, students learned about the ancient theatre, from the past to the nowadays. In mixed teams, they created their own ancient masks, actress, and actresses. They played their acting play about Europe, diversity, acceptance, tolerance. Students had as a task to take pictures and to upload them to the padlet (press here) in order to present them to their classmates in their homeland schools. During visiting ancient Olympia, ancient Elis (UNESCO HERITAGE), and the castle of the Chlemoutsi, students will have a task to take pictures and video of the objects, in order to make a PPT about it and a video about it for their homeland schools (press here). 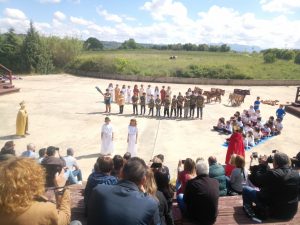 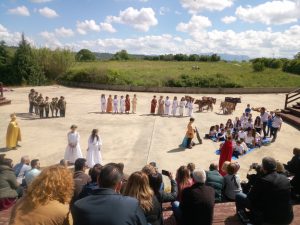 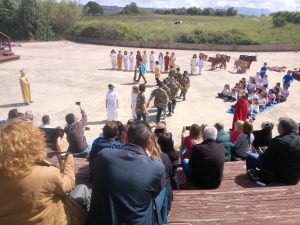 During the ICT lessons, mixed teams of the pupils from the partners worked on the etwinning platform and the padlet about Greek mobility. Also, students made a web search about the greek legends and create a Kahoot about it (press here) and  (press here), and created puzzles about the Ancient Olympic Games and the Olympic Values (press here) with the correct answer. Students During Social lessons, the students will learn the basics of Greece and Peloponnese history, the way that the ancient people took decisions by voting, comparing to the nowadays democracy and the functions of the European Parliament (press here). During the Music lesson, students sang Greek traditional folk song and danced it, also created green screen videos about it (press here) (here).

Students visited the Greek Church «Saint George», one of the main churches in our city, students talked with the responsible persons of the church about religious and cultural issues and we organized a common dinner. 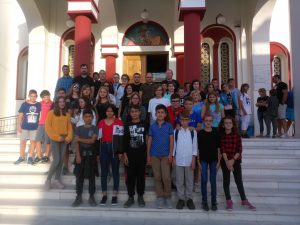 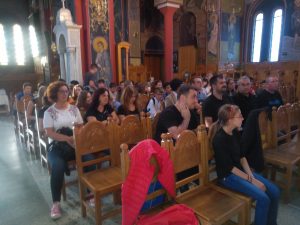 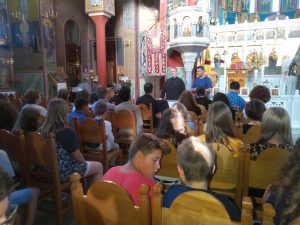 On Thursday during the Art lessons, students created a 3D model of the ancient Ilida‘s theatre. While students were made their 3D model, we make and the Math lessons, students use the 3D model of the ancient Ilida‘s and make measurements of the model, and checked if the model had the correct measurements according to the real object. During the music lesson, students sang traditional greek folk songs and they recorded it while they were dancing (press here) the material uploaded to the twinspace.

Also, students visited the Greek Museum of Education, they talked about educational issues in Greece during the times, educational policies, Greek school’s transformation. 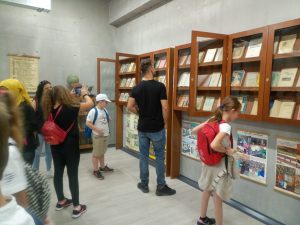 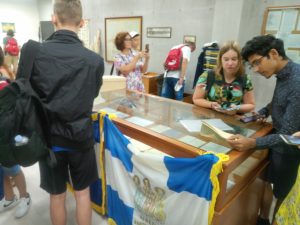 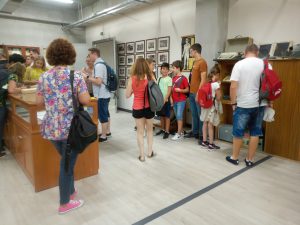 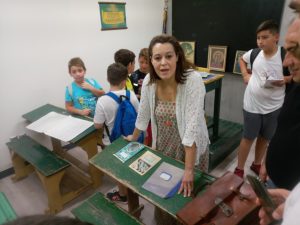 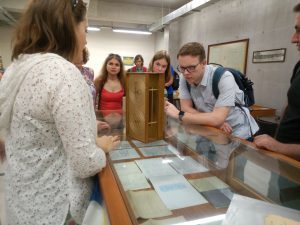 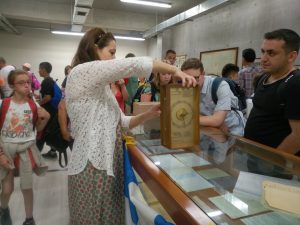 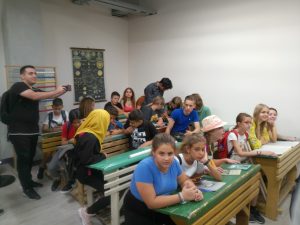 On Friday, the Greek school organized the final farewell ceremony, presented by the Greek students Greek folk dances, costumes. All the students danced Greek dances and dances from their countries. Teachers exchange their final presents and say goodbye. The activities that we made were aimed at the equity of all humans and human rights. They worked in mixed teams and collaborative in making theatrical plays about European values. With the guidance of the Greek student’s participants, students learned about the Olympic and the European values, and respect the differences, accept the diversity. So, in that way, students practiced their English language, vocabulary, and structures. Learned some basic vocabulary in the Greek language and improved their socio-cultural and intercultural ability and as they made new friends from the participant’s countries. They collected information in English and they made a high number of vocabulary and structures. The theatrical acts that we played grown-up the tolerance and the acceptance of the different. Students worked in teams from all participants’ countries. Students learned from their participation in the theatrical plays and the activities in the art lessons, that all humans are different but equals, that’s why we called our main product “The Myth of Diversity”. Students combined theatrical play with the Olympic values and European values. The activities and the visiting’s that we organized were based in the multidisciplinary since they covered multiple areas subjects (reading, writing, math, history, arts, dance, sports), activities such as collaborative learning in order to promote solidarity, civil and social responsibility, iner-personal and intercultural abilities. Students improved their experience with ICT and also had the opportunity to put into practice their English language, vocabulary, structures, as they collected information in English and they made a high number of vocabulary and structures.

The evaluation of the project (press here).