The Roma Of Bulgaria – Roma in Kazanlak

The Roma Of Bulgaria

Today’s Roma living in Bulgaria settle here at different times, coming from different places. The first Roma wave to the Balkans was in the 11th, 13th, 14th centuries. Due to the different names given to the Roma by Byzantine and other historians, it is not clear since when the first reports of the arrival of Gypsies in the Balkans date back. According to most gypsyologists, for the first time gypsies, under the name «atsingani», are described in «Life of St. George of Athos», dated back to 1100, telling about events from the middle of the 11th century.

Research shows that the first reliable springs for permanent settlements of Gypsies in Bulgaria are barely from the 13th-14th century. New groups of Roma settled with the arrival of the Turks and in the following centuries. In the 17th and 18th centuries, they were joined by Roma fleeing Wallachia and Moldova, where they had the status of slaves at the time. This gradually changed the source of Roma migrations in the Bulgarian lands – not from Asia Minor, but from the territories of today’s Romania. END_OF_DOCUMENT_TOKEN_TO_BE_REPLACED

Stages of the Education System 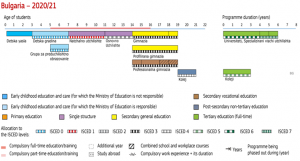 END_OF_DOCUMENT_TOKEN_TO_BE_REPLACED

Vocational school for transport and transportation management in Kazanlak

hool for transport and transportation management in Kazanlak is a school with over 60 years of history. Since its creation in 1956, the school has undergone many stages of transformation and has become a modern competitive educational institution with established prestige and authority in the rapidly changing conditions of the educational process, capable of forming students` knowledge, skills, national and human virtues in their preparation for socialization and professional realization. The high school offers training in four specialties: “Business Informatics”; “Automotive Mechatronics”; “Haulage Technic” and “Electrical Equipment for Transportation Technic”. In order to make our education more flexible and to keep our children in school, we also offer the possibility of an independent form of education. END_OF_DOCUMENT_TOKEN_TO_BE_REPLACED