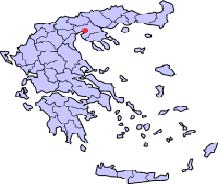 the capital of Macedonia and second largest city of Greece. It was first established in 316 B.C. by Kassandros and named after his wife, Thessaloniki, half sister of Alexander the Great.
Thessaloniki was the second most important city of the Byzantine Empire, next to Constantinople, and is full of beautiful examples of Byzantine art and architecture.
Today Thessaloniki is a modern city with old houses and neoclassical buildings.

A BRIEF INTRODUCTION OF THE SCHOOL

The Diapolitismiko Gymnasio Thessalonikis (Thessaloniki Intercultural High School) was founded in 1985 for the children of emigrants returning to Greece from Germany, the United States and Canada.
Its original name was the High School for Expatriate Greek Children (Gymnasio Apodimon Ellinopaidon).
Early in the next decade, following the mass influx into Greece of refugees from the countries of the former Soviet Union, the profile of the school began to change. Although many of these children were of Greek descent, their first Language was Russian rather than Greek.
Since then the school has continued to receive children from the former Soviet republics, children of immigrants, economic refugees from Albania, China, Romania, Bulgaria, Ukraine, Poland, Uzbekistan, Serbia, Palestine, Lebanon and political refugees from Somalia, Nigeria, Iraq, Afghanistan, Pakistan, Iran, St. Domenicus, Tibet, with none knowledge of the Greek language.

The Greek Embassy or Consulate places entrants in one of the school’s three grades, according to the level they have completed in their country of origin.
Each grade has a beginner’s section, for children with no Greek at all. Children in these sections are given 14 hours a week instruction in Greek as a second language, taught from suitable textbooks, in place of the Ancient Greek and Literature classes prescribed by the regular curriculum.
For all other subjects, all children, whichever language section they are in, follow the regular programme prescribed for Greek schools. Bilingual teachers give some instructions in the children’s native tongue. 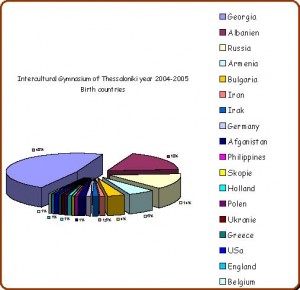 Since the year of its foundation, our school has participated in many different activities.
Some of the most important are the following: 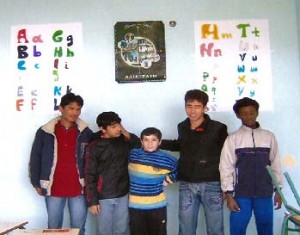 A Guide titled “Welcome to Greece” for those just arrived to our country.

All children are equal” 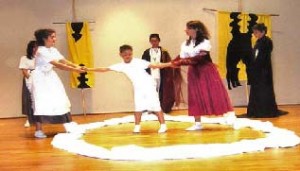 a. My “mobile” problem

b. My school’s backyard

c. A hole in the sky

d. Koronia: SoS from a lake

The ICT in school

The school has one computer classroom with fifteen computers, connected to a network and the necessary peripheral equipment.

To teaching maths the teachers use a variety math commercial software that the Greek Pedagogical institute has bought the licenses and translate them in to Greek language, Cabri , Geometry. Sketchpad, Function Probe, Modelus and recently the open source software Geogebra

Three construction problems by the early Greek mathematicians attained the status of classical problems in mathematics:

Crop circles (in French : les agroglyphes, in German : Kornkreise) are geometric, non-geometric or random figures in crops or vegetation. They appear in the form of one simple circle, multiple circles or more extensive and complicated patterns. The dimensions of crop circles differ too. Simple circles can have a diameter of just a few metres but the more complicated patterns can be as big as several football fields. These figures are most commonly witnessed in the South of England, in areas close to old places of worship like Stonehenge or Avebury.

Many patterns of crop circles show such an intriguing structure that they are simply waiting to be discovered. The purpose of this article is not to find out how crop circles are being made. The internet offers a lot of information (but unfortunately also a lot of nonsense) on this subject. Theories about the origin of the circles differ : some see them as messages of aliens, others think they are produced by well organised circle makers (hoaxes), still others think they are the result of exceptional weather conditions.

“Construction with compass and ruler” seems to be a particularly efficient tool for these reconstructions but modern geometry software offers us precision, unknown before. One thing cannot be denied : the makers of crop circles must have a sound knowledge of geometry.