Electrons are highly mysterious,
this topic indeed is quite serious
It’s starting to feel so imperious,
I think I’m becoming delirious.
I wanted to finally grasp
The quantum mechanics at last.
I stayed up for half the night reading
and by morning I felt like retreating.

I hardly could see how this thing could be
a concept I could comprehend.
It’s as if I’d come to the point I was numb,
all the way to my mind’s bitter end.
After all those hours of thinking,
just as I felt I was sinking,
I was saying things like “Aye yigh yigh yeynman”
when I heard the voice of Dr. Feynman.

He gave some advice that sounded quite nice —
he talked about imagination:
We must “stretch it out to the utmost,”
a companion to our concentration.
When we open our minds and calmly let go
of needing things to be familiar,
we can then head on face them and gladly embrace them
and celebrate how they’re peculiar.

An electron looks like a particle,
and it also acts like a wave,
and once I began to accept this
that electron began to behave.

This is called complementarity
when a concept that seems a disparity
is the very best way we can show
how a set of phenomena go.

He went on to say how he learned this one day
while studying dear Werner Heisenberg,
who walked after dark to his neighborhood park
just to keep his blood pressure from risin'(berg)

As he walked on in his torment,
questioning waves versus particles,
he encountered his own aha moment,
which is now found in hundreds of articles.

More than eighty years ago,
Werner Heisenberg managed to show
probability and uncertainty
both exist, we must agree.
The future’s unpredictable
no matter how well we see.
Dear Heisenberg embraced this,
the beauty of uncertainty.

Again, it’s called complementarity
when a concept that seems a disparity
is the very best way we can show
how a set of phenomena go.
The very act of observing
changes an electron’s location.

And I’d be remiss if I didn’t say this
was a bit of a collaboration.
The ideas that all came together
for Heisenberg to have his zinger
were inspired by studies before
that came from Niels Bohr and Schrödinger.

And, indeed, Schrödinger and Bohr
were inspired by who came before
like Pascal and Coulomb and Newton
and Maxwell and Einstein and more.
There’s a path from all of this knowledge
and it’s leading directly to you —
to pick-up where others left off
and discover a concept that’s new.

And remember your imagination
is a voice inside that can help you
to understand quantum mechanics
and so many more things about you.

These particle waves are so active,
in each atom they’re racing around;
they’re all taking up so much room
and they really and truly astound.
The vast spaces where electrons roam
mean we’re not as solid as we thought —
so, actually, when you sit down to tea
you’re levitating on the spot!

The wilder the concept the more fun it is
I feel scientifically brave
And thanks to dear Heisenberg’s aha we know
an electron is both a particle and a wave! 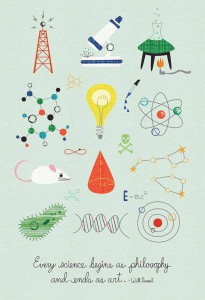 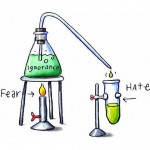