Over the last week radiation detection stations in Finland and Sweden recorded a rise in four radioactive isotopes that are extremely rare in nature, but are common products of decay chains initiated in nuclear reactors.

A sharp increase in radioactive isotopes have been reported in parts of Scandinavia. The levels recorded are far below anything thought to pose a threat to human health. However, a sudden rise like this is likely to reflect an unintentional release of particles that may be dangerous closer to the source, particularly if the cause is not found and contained.

Over the last week radiation detection stations in Finland and Sweden recorded a rise in cesium-134, cesium-137, cobalt-60, and ruthenium-103. All four are radioactive isotopes that are extremely rare in nature, but are common products of decay chains initiated in nuclear reactors. Two weeks earlier, Norwegian monitoring sites detected a spike in radioactive iodine-131. It is not known if the two are connected.

The National Institute of Public Health and the Environment in the Netherlands (RIVM) issued a statement on the Swedish/Finnish detection stating that the radionuclides are artificial, meaning they are man-made. The composition of the nuclides may be explained by an anomaly in the fuel elements of a nuclear reactor. RIVM has performed calculations to locate the source of the radionuclides. These calculations show that the arrival at the measuring stations took place from a South East direction. It is unknown when the release took place and hence over which distances it dispersed.
The possible source location, therefore, covers a large area, and a more specific location for the source cannot be determined owing to the limited number of measurements. 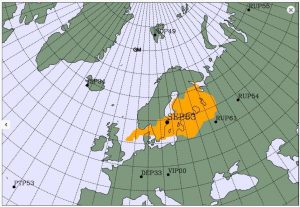 For those with long memories (or watched the HBO series), the reports may stoke fears of another Chernobyl. The meltdown in that case first came to the world’s attention after increased radioactivity was detected at a Swedish nuclear power plant.

So far the increase above background radiation levels is more reminiscent of the ruthenium cloud detected across Europe in 2017 and recently confirmed as coming from a civilian reactor. Indeed so far, the detections are smaller in geographic area, and lower in concentration, than the 2017 event.

On the other hand, the reason monitoring stations are capable of detecting such small doses of radiation is precisely because early warnings can prevent things running out of control. That only works, however, if the responsible agency takes the warnings on board.

The RIVM claims the particles travelled from the direction of western Russia. There are two Russian nuclear power facilities in locations that could have produced an emissions cloud like this one. However, Russian news agency TASS reported that Rosenergoatom, which operates both, denies there have been any problems at the plants, or that radiation levels are higher surrounding them.

A similar situation occurred in 2017: radioactive ruthenium-106 was found in the air in several European countries. Because many more measurements were available then, RIVM was able to locate the source more accurately. The calculated source was in excellent agreement with an existing nuclear facility that was pointed out as the most probable source in multiple international investigations.