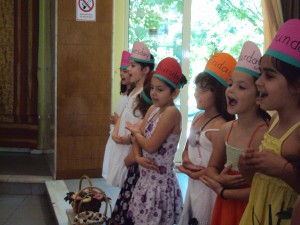 It is more than a  mere pleasure  to see what first and second     graders can learn and do in just one school year when they have great teachers beside them. It is a precious  reward for us all who believe that when teachers work hard and love the kids, they do miracles.

It was yesterday, the 10th of June, that the English teachers of the 3rd and 13th Primary schools of Karditsa along with their pupils presented to their pupils’ parents samples of what the little kids have achieved in terms of foreign language acquisition this year. The pupils acted out  English fairytales they had studied with their teachers during the school year and sang English songs. They were real performers and seemed to feel confident in giving their performance in English. Isn’t it amazing? Every single pupil had a part and they were all, despite their young age, absolutely aware of what was happening on stage. 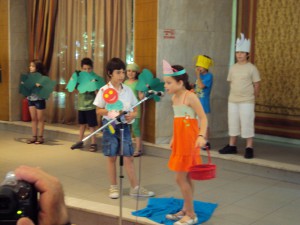 The objectives have been achieved. The pupils used the language to do something with it and they cooperated to give their performance. They have become familiar with what it is like to communicate in a language other than the  mother tongue and they have learned already quite a great deal of language through games, songs and stories. All work has been done through oral language so the second graders in particular will find it easier to acquire the written form of the language when, next year, they are in the third grade. All pupils will be at the same starting point and they will be familiar with the sound of the language. All in all, thanks  to the teachers’ enthusiasm and  hard work this new teaching approach proved to have brought great results. 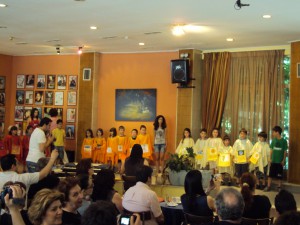