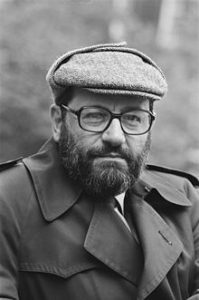 Umberto Eco[a] OMRI (5 January 1932 – 19 February 2016) was an Italian novelist, literary critic, philosopher, semiotician, and university professor. He is widely known for his 1980 novel Il nome della rosa (The Name of the Rose), a historical mystery combining semiotics in fiction with biblical analysis, medieval studies, and literary theory. He later wrote other novels, including Il pendolo di Foucault (Foucault’s Pendulum) and L’isola del giorno prima (The Island of the Day Before). His novel Il cimitero di Praga (The Prague Cemetery), released in 2010, topped the bestseller charts in Italy.[2]

Eco also wrote academic texts, children’s books, and essays, and edited and translated into Italian books from French, such as Raymond Queneau’s “Exercises in Style” (1983). He was the founder of the Department of Media Studies at the University of the Republic of San Marino,[3] president of the Graduate School for the Study of the Humanities at the University of Bologna,[4] member of the Accademia dei Lincei, and an honorary fellow of Kellogg College, Oxford.[5]

Eco was honoured with the Kenyon Review Award for Literary Achievement in 2005 along with Roger Angell.

This is an example of a WordPress page, you could edit this to put information about yourself or your site so readers know where you are coming from. You can create as many pages like this one or sub-pages as you like and manage all of your content inside of WordPress.