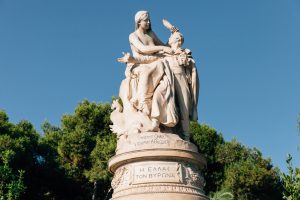 A marble 3-metre tall complex showing Greece personified, crowning Lord Byron with a palm branch—a symbol of immortality—as a token of gratitude. The base of the sculpture is modular with embossed decorations on top and it exudes monumentality.

The nude male figure on the back of the sculpture symbolises the enslaved Greeks.

Greece is depicted in a larger scale—adding emphasis to its form—with an oval face and wearing a headband, which falls on her back.

George Gordon, aka Lord Byron, (1788-1824) is depicted shaved, with combed hair. He looks at Greece with passion, although his body and the palm of his hand are moving away from her. The posture has romantic overtones, since Byron was a romantic poet.

He was one of the most honoured personalities of the Greek Revolution, a devoted philhellene. He was in Greece during the revolution and died in 1824 in Messolonghi due to illness.

His body was embalmed, but the Greeks wanted some part of their hero to stay with them. According to some sources, his heart remained in Messolonghi. His other remains were sent to England and he was buried at the Church of St Mary Magdalene in Hucknall, Nottinghamshire.