As far as archaeologists know, Asian monkeys weren’t trotting the globe during the Bronze Age. That’s why a millennia-old Greek painting of a gray langur—a primate native to the Indian subcontinent—was surprising enough to stop researchers dead in their tracks.

Archaeologists and primatologists re-analyzing wall paintings found in Akrotiri, a Minoan settlement on Thera (modern-day Santorini) buried by volcanic ash around 1600 B.C., have uncovered evidence that Bronze Age Greek artists knew of—and may have even seen—monkeys whose native habitat was thousands of miles away. Their findings, newly published in the journal Primates, hint that ancient cultures were more intertwined than previously thought. Eager to exchange ideas, artists or merchants may have journeyed far from home; eventually, the fruits of these wanderers’ travels were immortalized in paint.

Previous researchers have already noted that some of the Bronze Age artworks unearthed on the Greek islands of Crete and Thera depict monkeys of all shapes and sizes. Based on the animals’ features, as well as close trade relations between the Minoans and the Egyptians, some have been pinpointed as olive baboons, which are native to the forests and savannas of the African continent.

Other painted primates, however, were more mysterious. For instance, sprawled across one of the Akrotiri building’s walls is a fresco populated by blue, rock-climbing monkeys with buoyant, S-shaped tails. The primates remained unidentified until recently, when Marie Nicole Pareja, an archaeologist at the University of Pennsylvania, recruited a group of primatologists to re-examine the painting.

“It felt really silly to examine an image of these animals as an archaeologist and art historian without asking for the input of people who look at them every day,” she tells Tom Whipple at the Times.

After snapping photos of the fresco and several other Aegean artworks, Pareja sent them to colleagues around the world. Several confirmed the Egyptian nature of the majority of the monkeys but reported that the Akrotiri painting “unambiguously” contained gray langurs, says Pareja to New Scientist’s Michael Marshall.

According to Whipple, the langurs’ tails gave them away. Flexing skyward, they bore no resemblance to the appendages of African monkeys, which droop downward. Instead, they acted as calling cards for gray langurs, a species most likely hailing from the Indus Valley—then home to its own bustling civilization.

How exactly the artists came across their source material remains unclear. As Whipple reports, the exquisite detail seen in the fresco makes Pareja suspect it’s unlikely the works’ creators simply copied the monkeys secondhand. That means someone, whether human, monkey or both, undertook an arduous crossing of the many thousands of miles that separated the civilizations, or perhaps met somewhere in the middle.

“When you consider the distance of the Aegean to the Indus, compared to Egypt, it is incredible,” says Pareja.

Such cosmopolitan behavior probably wasn’t easy, but “our ancestors were interested in rare and exotic things, just as we are,” Peter Frankopan, a global history expert at Oxford University who wasn’t involved in the study, tells Whipple. “Long-distance trade, and connections between the Mediterranean, Asia and the Indian Ocean are well attested, even in this period, for high value, expensive objects.”

A live langur from a far-flung locale would certainly fit that bill. There’s even evidence from other archaeological finds supporting the idea that foreign monkeys might have made it to Greece: a fossilized skull on Thera, for instance, and an ivory figurine on Crete.

Wherever the primates ended up, they were significant enough for the locals to painstakingly craft into art. Known to archaeologists since the 1960s, the Akrotiri wall paintings feature scenes of daily Greek life in the Bronze Age, illuminating the manners and customs of the time, according to the Thera Foundation. If gray langurs made the cut, it’s unlikely the primates were a one-off thought for the ancient Minoans.

The monkey’s presence also signifies another cultural value that remains a keystone of the human experience: intellectual exchange.

“This is showing us that what people later consider the Silk Roads are working even then, at least indirectly,” Pareja tells Whipple. “We talk about the Minoans, about the Egyptians, about the Indus peoples, all as if they are separate. But they are interconnected.” 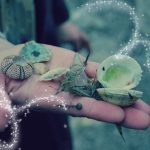