“The Arab Spring & Peace in the Middle East and Christian Perspectives” 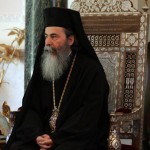 For millennia, the Middle East has been a special place. Here great cultures have arisen, and here great religious traditions have met and shaped civilization. Judaism, Christianity, and Islam have, quite literally, grown up together here over centuries. It is important for us to remember that Christianity is not alien to this region, but native to it. We are part and parcel of the unique cultural and religious make-up of the Middle East.

In spite of the fact that communities here are designated by religious affiliation, and so appear to the outsider as distinctly separate from each other, let us not forget that they share a common history, as well as common linguistic and cultural roots and social customs. In this commonality, we begin to see the force of what is called symbiosis – a genuine living together in which many conventional categories are crossed as the people of this region live their daily lives, create families, do their work, seek to be faithful to their religious tradition, and are loyal to their nationalallegiance.

In just this environment of symbiosis do we see the “ecumenical and unifying spirit of Orthodox Christianity” in action. The mission of the Church in this region is, in part, to sustain and support this unique symbiosis so that all our peoples may live in peace, security, and justice.

The Rum Orthodox Patriarchate of Jerusalem is the oldest continuous religious institution in the Middle East, and we have been faithful to this mission, conscious of the power of the “unifying force” of Orthodox faith and culture.
This unifying force of Orthodox faith and culture is founded on an understanding of the nature of the Orthodox Church. The nature of the Orthodox Church is based on a relationship of autocephalous and autonomous Local Churches that fully acknowledge the integrity of each Church, and therefore have succeeded over the centuries to live with a vibrant “unity in persity.” This persity by no means lessens the strength of the fabric of our unity.

This means that the gift of cultural, linguistic, and national persity which so characterizes the Local aspects of a State of a group of people, is not a threat to the unity of the region but a testimony to the true nature of the One.
There is no doubt that our common humanity is today confronted with harsh forces of injustice, disrespect and even humiliation, This is all taking place under the cover of political and religious umbrellas and in the name of All-mighty God.

We are experiencing fast growing political polarization resulting in religious polarization. Violence, aggression, hatred and bigotry, which produce unrest and insecurity, have taken the place of peace and justice, which produce security and prosperity.

Nevertheless, we believe that conflict, prejudice, hatred and injustice can be turned into peace, mutual respect, love and righteousness; for the Holy Scriptures commands us to: “turn away evil and do good; seek peace and pursue it”(Ps. 34).

The Middle East region has historically and religiously been declared a meeting place and a host of the three monotheistic religions; that is Judaism, Christianity and Islam. This is due to the fact, that the Middle East is inextricably associated with the sacred history of these faiths.

We look to recall and evoke that Christians constitute an essential element in the composition of the social fabric and continue to contribute effectively to various walks of life in our communities.

This fact stems from a two thousand year old heritage in which we have played key roles in the civil, cultural and political realities of the Holy Land.

This legacy was built on mutual understandings, respect and tolerance between the Church and its surroundings, especially Islam. The culmination of such understanding has been shaped and formed by “al-Ohda al-Omariya” between the two great ethno-religious leaders: Khalipha “Omar bin al-Khattab” and Our predecessor Patriarch of Jerusalem Sophronius. This almost 1400 year-old agreement is still respected until today. What is the essence of this covenant that continues to resonate its impact in our contemporary reality? It is precisely the spirit of this covenant which allowed enough room to overcome and diffuse areas of human predicament and thus allowing for harmony between Christians and Muslims to flourish as well as heal historic turbulences and political unrest. We believe it is time for the Spirit of “The Covenant of Omar” to extend its boarders and manifest itself in our modern and present times.

Let us take advantage of all such gatherings, to encourage those who strive for peace to come and join forces with us, in order to promote peace and justice in our region and beyond, for the sake and benefit of the generations to come; for; “blessed are the peace-makers” (Matth, 5, 9).

We have gathered at this conference to listen to one another. Throughout this conference we have been hearing speakers remind us, quite rightly, that it is a perversion of the fundamental tenets of Judaism, Christianity, and Islam to use these traditions to justify acts of violence and terrorism, and that it is the duty of those who do understand religion as a tool for peace to condemn violence quickly and without equivocation. We are called so to teach and preach that the faithful of our traditions understand clearly the role of religion for the building of just and lasting peace in our world.

In the cause of resisting violence and promoting peace-building, the role of religious leaders, especially the clergy, is crucial, We do not believe that the clergy should behave like politicians; clergy have different, but equally serious ethical, theological and pastoral responsibilities.

But we do consider that, just as political leaders must be shaped by the moral principles of their religious traditions, in the same way religious leaders have a role in forming congregations and communities of faithful people to exercise responsible citizenship. This role manifests itself at the grass-roots level through educating our congregations and the general public on the importance of peaceful co-existence; in providing social services that focus on the equality of all people regardless of religious or ethnic differences;   in taking strong positions in denouncing violence; in leading and participating in public and private dialogue between different religions and ethnicities; and in supporting initiatives, institutions and leaders who are committed to the same social and civic good.

We thank you for this immense effort. We pray to the almighty God to enlighten in our deliberations and endeavors”.