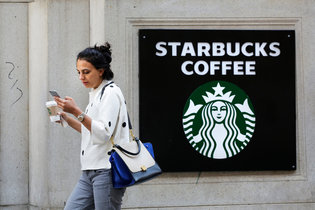 The global obsession with coffee shows no signs of abating, propelling sales and profits at the world’s most ubiquitous coffee chain, Starbucks.

In the quarter that ended June 28, sales in Starbucks stores open at least a year climbed 7 percent, thanks in large part to a strong increase in customer traffic that Howard D. Schultz, the company’s chief executive, said was equal to 23 million new transactions.

“The past quarter stands among the strongest, most remarkable of quarters in the 23-year history of Starbucks as a publicly traded company,” Kevin Johnson, president of Starbucks, said in a phone interview.

“The momentum right now is already pretty fantastic,” said David Palmer, an investment analyst at RBC Capital Markets. “Starbucks stock has done extremely well already, so the battle here is that the company needs to do extraordinary things just to meet expectations.”

In the conference call, however, Mr. Schultz said that Starbucks did not “expect to maintain these kinds of levels of high single-digit comp numbers that we did today.” He said Wall Street should expect comparable store sales of more in the mid-single-digit range.

Earlier this month, Starbucks announced price increases of 5 to 20 cents a serving on some of its coffee drinks, saying that a variety of its costs were increasing, like rent, marketing and labor. The effects of that decision, however, were not reflected in the financial report.

Wall Street has been watching Starbucks’s introduction of a mobile ordering and payment system, which is available in more than 4,000 stores around the country. Mr. Johnson said that 20 percent of all money paid to Starbucks in the United States came in through its mobile app.

“These new capabilities like mobile order and pay enable us to bring in new customers to Starbucks,” he said, adding that the service will be available in all company-owned, United States stores by the holidays.

The Asia and Pacific region showed the strongest growth in the quarter. Same-store sales grew 11 percent on a 10 percent increase in customer traffic.