REQUIRED MATERIALS:
Gas law’s device GLA01
Notes for device’s institutions
1. Cylindrical metallic chamber with volume almost 300mL, closed at one edge ,
that internally has a moving piston. The piston moves inside the chamber with
manual mechanism. There is also a resetting hook for the piston.
2. Metallic manometer with scale between 0-2.5 bar, with striping per 0.02 bar.
On the manometer there is adapted a flexible tube for connection with the
metallic chamber via suitable spigot with three entrances. Watch out the
manometer’s tube to be well screwed so that we won’t have any changes at the
indication owing to leakage. Don’t tighten a lot because it will break.
3. Digital multimeter/thermometer with a temperature sensor. This multimeter,
for saving battery, it shuts down automatically after a few minutes. In order to
restore the indication, puss the button POWER twice. The cable’s plug, which
connects to the digital thermometer, haw two lights with different width each.
Put it in a way so the light with the biggest width is toward the screen. When
the thermocouple’s plug is secured to the metallic cylindrical tube and we put
it in or take it out the water bath, be careful that it is above the nick so that it
won’t be scuffed.
4. Calibrated scale between 0-360 mL, with striping per 2 mL, which
corresponds to gas’s volume that is encaged in every phase of the experiment.
5. Three-way spigot.
6. Cylindrical vessel of PVC (water bath) in which is positioned the metallic
chamber in order to create changing conditions of temperature. The water bath
has an adapted angular tube/nozzle near the top lid for its filling with water
and at its down part, near the bottom, it has a flexible runoff tube for draining
the cylindrical vessel. Be careful so that the PVC vessel has no water leakage
in its base. If it has, then we can put a drop of instant glue on the spot of
leakage and let it dry.
REQUIRED KNOWLEDGE: 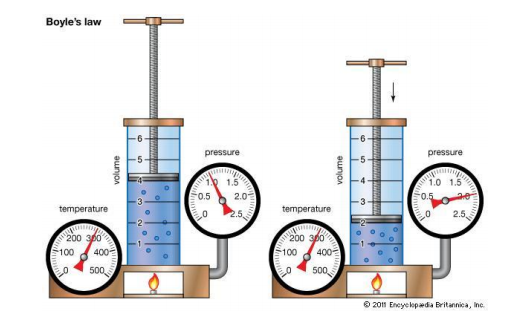 Boyle’s Law
Experimental process (from the instruction manual of gas law’s device
GLA01)
1. Turn the regulators of the three-way spigots in such a position, so it allows the
entrance of air in the cylindrical chamber. (┤)
(On spigot’s controls there are engraved arrows that show which entrances
communicate with each other in every position)
2. Pressing the strain’s release lever, pull the piston’s strain pointing upwards
until its mark coincides with the indication of 300 mL. Turn the regulatory of
the lower spigot, so that the chamber’s space communicates only with the
monometer. (┬)
3. Note that the manometer’s indication is 0. Although the gas’s pressure is one
atmosphere ( 1at = 1,01325 bars)
Every moment the pressure of air in the vessel is pair = patm + pman , where patm is
atmosphere’s pressure and pman is manometer’s indication. The atmosphere’s
pressure on the see surface is 1atm = 1,01325 bar. So when the manometer
measures the atmosphere’s pressure and it shows 0 bar, we should fix the
indication.
4. At the following chart write the indication of the pressure gauge.
5. Acting in the grip, range the piston in 280 mL and write again the indication
of the pressure gauge.
6. Continue in the same way with steps of 20 mL up to 160 mL.
7. Repeat the same procedure for different temperatures of the air that is
trapped in the cylinder. To create conditions of different temperatures, fill the
warm bath with hot water dropping it carefully, with a beaker, at the black
tube that adapted to the top edge of the water bath. Wait a bit until the
indication of the digital thermometer has been stabilized and write the
temperature of the work sheet. Repeat the measurements (p, V) for different
temperature. To achieve different temperature empty a little of the warm water
of the water bath in a beaker freeing for a bit the rubber tube at the lower end
and fill with a corresponding quantity of cold water from the top.
To get some air quantity (same mol) when we make measurements in
different measurements and for comparing the charts, we must close the tap (at
300 mL), which isolated the beaker from the environment at the ambient
temperature and then we have to put the hot water in the water bath. Thus the
product p’ V will be the same, like the first time when we measured at ambient
temperature.
8. Draw the curves (p-V) which are resulted from your measurements in graph
paper, after noting at the axes the appropriate scales as well as the units of
measurement.
Work Sheet (Isothermal Variation)
Baseline Ptemp = 1.01 bar Vinitial = 300 mL.
Measurement

Fly me to the moon

Better three hours too soon than a minute too late. – William Shakespeare.

Copyright © 2021 Once an erasmus,always an erasmus